The Failure of Imagination 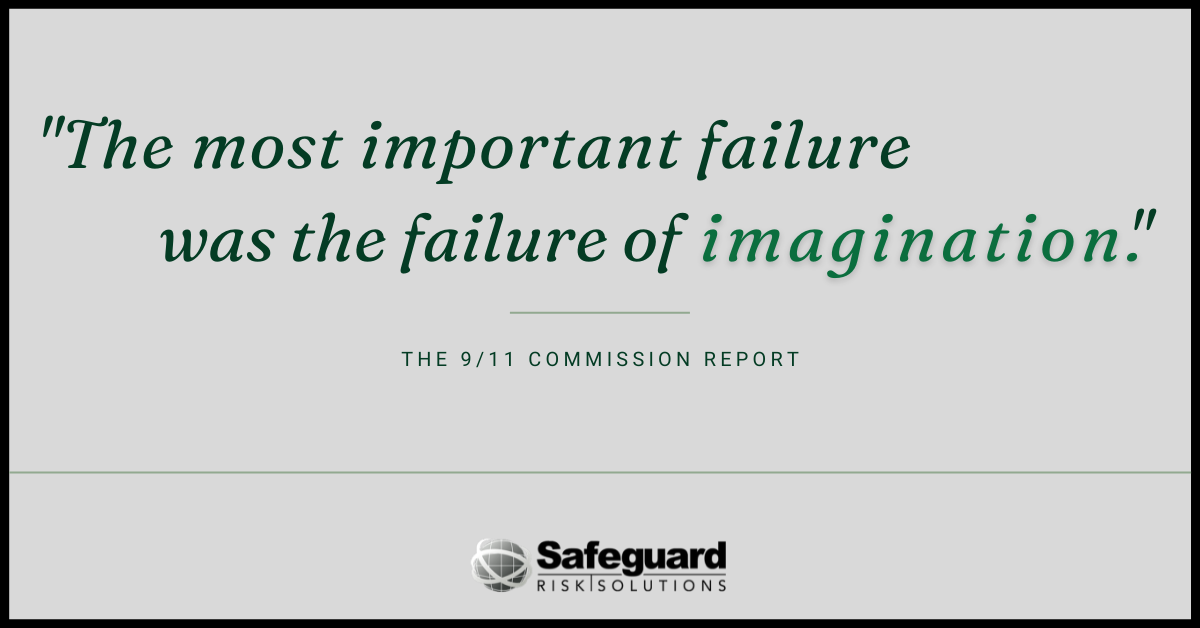 There are many who are saying the tragedy in Uvalde happened because schools in our country are in denial.  “There is no way something like that can happen here,” school administrators and staff say.  Among my peers, we often say the three mantras of a school are: ‘This can’t happen here’, ‘I cannot believe this is happening here’ and, ‘This will never happen here again.’  But are schools across the country really in denial?  Or is there a failure of imagination?

Despite tragic events and a false narrative used by the media and others regarding the number of school shooting events, schools are safe. Despite the proliferation of school safety experts who will tell schools, “It is not a matter of IF you will have a school shooting but WHEN you will have a school shooting,” schools are safe.  Just because something bad could happen in your school does not mean something bad will happen in your school.  Schools have Emergency Operation Plans.  Schools conduct regular staff training and many conduct drills with local First Responders.  Schools have added safety features, such as single-point entries, video door entry buzzers, camera systems, alarms to alert office staff of propped doors, and safety film on entry doors.  Schools have security personnel, School Resource Officers, and security guards. Schools have improved mental health services, brought in community support groups for students, and trained Threat Assessment Teams. Schools are safe. If schools are safe, why do we still have shootings at schools? Are schools really in denial that something bad will never happen in their building?  Or is there a failure of imagination?

“Failure of imagination” is a phrase indicating a circumstance wherein something undesirable yet seemingly predictable was not planned for.  We all know the dangers of using our electronic devices while driving.  We say this will never happen to us, not because we are in denial, but because we know not to use our electronic devices while driving.  We cannot imagine ourselves being in a crash because we were using our devices. And yet, even though we know the dangers, we grab for the device to check an incoming email or text while driving.  We are not denying the danger, we just cannot imagine something bad happening to us.

Robb Elementary School, like so many other schools where shootings have occurred, had Emergency Operation Plans. The district had its own Police Department. They had safety policies.  First Responders trained with the staff and in the buildings on how to respond to an Active Threat Event. The building had a single point of entry.  Exterior doors were locked.  The staff, students, parents, and the community had every reason to believe their school was safe.  Everything was in place because they knew something bad could happen in their school. They could not imagine anything bad would ever happen in their building because their schools were safe.

Do you think the teacher who propped open a locked door to get something outside could ever have imagined that a mentally ill high school dropout would enter the school with a rifle?  Do you think the teachers who left their classroom doors unlocked could have ever imagined an evil person would have walked into their rooms with the intention to murder children? Could we ever imagine a Chief of Police would ever tell responding Law Enforcement Officers to stand down and not go after the killer?

I never make unannounced visits to schools. The building administrator knows when I will be on-site and if they are following policy, have let the administrative assistants in the front office know when I will be arriving.  I arrive at the school with an ID, I face the camera on the video door buzzer system, press the button, and hope to hear, “Good morning.  Welcome to Anytown Middle School.  How may I help you?”  I am shocked when instead of being buzzed in, the administrative assistant waves me in.  When I ask if the buzzer system is not working, I am told they don’t like the system because it is inconvenient for them and the parents!  I share my experience with the principal, and I am told this is a recurring issue.  This morning I received a call from the same principal.  She was out last Friday, and a parent walked into the building without being buzzed in.  This is a parent who already has an ax to grind with the school. The parent launched into a tirade that the front door was not secured and announced they had a Concealed Carry Permit, and their firearm was secured in the trunk of their vehicle.  “What if I would have brought that inside,” the parent yelled.

The principal called me to see if the parent could have the firearm secured in their vehicle on school property. In Ohio, the answer is yes.  But I reminded the principal the administrative assistant had not used the buzzer system when I visited and this seemed to be an ongoing problem, even the same week as the killings in Texas!  The principal stated she was going to send an email to the administrative assistant reminding them to use the buzzer system.  Why not a letter of reprimand and a last chance agreement?  Just because there is a failure of imagination on the part of the administrative assistant does not mean the building principal should not hold her accountable.  Bad things happened in Uvalde because people did not follow rules and policies because they could not imagine a tragedy happening at their school.

Today, both schools and Law Enforcement are better trained and prepared for Active Threat Events than we were when Columbine happened.  Schools and Law Enforcement review plans, policies, training, and procedures based on every event that happens in this country to constantly improve.  No one is in denial that something bad can’t happen in our schools.  An Active Shooter Event is so horrific that we cannot, nor do we want to ever imagine it can happen at our school. The failure of imagination is why these events will continue to happen even if our schools are safe.