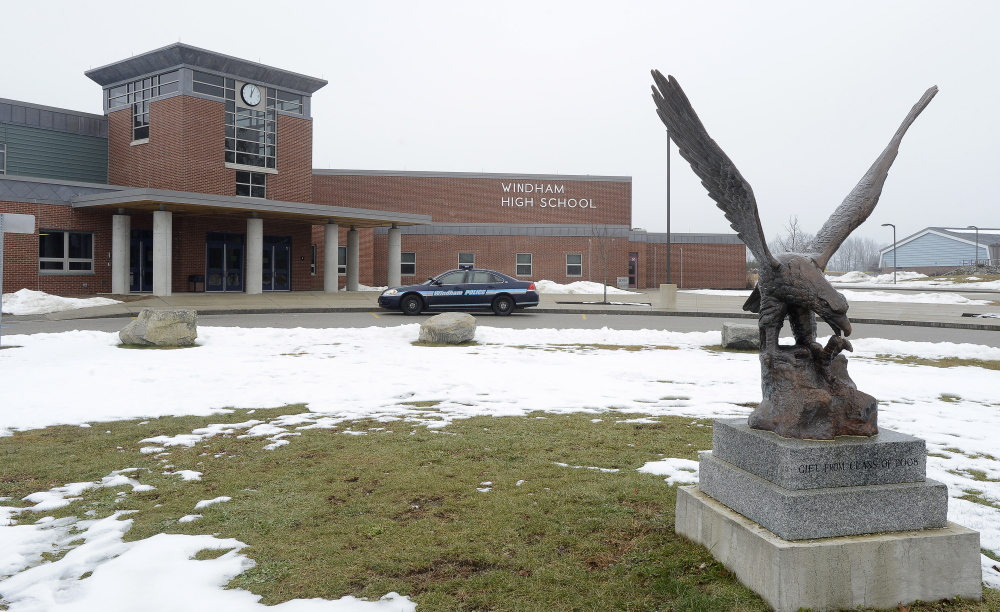 WINDHAM — The superintendent for Windham and Raymond schools concluded a meeting with police Tuesday afternoon but released no new details about the investigation of a pair of threats that shut down all the district’s schools or about whether school will resume Wednesday.

Superintendent Sandy Prince said after the meeting at his office that police and school officials will issue a joint statement later in the day.

Meanwhile, a school safety expert said that schools must err on the side of caution when responding to credible threats.

The superintendent’s office in Windham is the only building in Regional School Unit 14 open Tuesday, the day after two officials in the district received emails threatening the school system.

No students are permitted on school property and all events scheduled on school grounds Tuesday are canceled, including athletic practices and games, adult education classes, concerts and meetings, according to a message on Twitter Tuesday morning from Prince.

Off-site games and practices for Windham High School students would be allowed to proceed and coaches would provide information about locations for bus pickup and dropoff, the message said.

Inside Windham High School, Principal Chris Howell was catching up on paperwork and preparing for classes to resume – whenever that may be.

Along with custodial staff, he said, he was the only one in the building.

Aside from a cruiser out front of the high school, which Howell said belonged to the school resource officer, there was no sign of police presence on the Windham school complex around noon Tuesday.

Meanwhile, a group of high school seniors was spending the day off shopping at Marshalls in the Windham Mall. Earlier, they had gotten breakfast at Danielle’s Sebago Diner in Raymond and planned to spend the rest of their day napping, catching up on homework and working on college applications.

Jackson Giampino was supposed to play in a basketball game Tuesday afternoon against Sanford, but the home game was postponed until Wednesday because of the threat.

The group agreed they’d rather the ordeal be over than get another day off school.

“It would be nice to be safe,” said Emily Algeo.

The teenagers said there’s been speculation about the threat, but no indication of the source of the emails or what they said.

“No one has any ideas,” said Aiyanna Maciel.

Parent Kate Delewski said unless she gets some answers to those questions, she doesn’t plan to let her 5- and 6-year-old daughters go back to Windham Primary School.

“I don’t feel comfortable sending my kids back until they tell us why they were out in the first place,” she said.

A physician’s assistant at Mercy Hospital, Delewski had to leave work Monday to pick up her children from school until her husband could get out of work, so she could go back to the hospital. She took Tuesday off to take care of her children.

Students and staff were sent home from all Windham and Raymond schools Monday morning, after Prince and Windham Middle School Principal Charlie Haddock received the threatening emails, which weren’t identical and came from different sources.

School officials and police wouldn’t release the content of the messages, but said they didn’t target a specific building, which is why the entire district was released early Monday. Prince also said he believed they were more serious than a bomb threat being telephoned in to the schools.

Gary Sigrist, a school safety expert with Ohio-based Safeguard Risk Solutions, said threats must be evaluated to determine whether the threat is a low-level risk – like someone writing a bomb threat on a bathroom mirror – or a more serious threat.

“Schools should always consult with law enforcement when receiving a threat, but the ultimate decision about whether to close school is for school officials,” he said.

“As a school, you cannot make this decision on your own. You have to make this decision based on what your first responders say,” Sigrist said. He said that “in addition to local law enforcement, members of the state’s fusion center – where sensitive intelligencer is shared between state, federal and local law enforcement – should be notified to determine whether other areas have faced similar threats.”

Sigrist, who has received training from the Department of Homeland Security, said that officials find a device in only 2 to 5 percent of bomb threats, and often that is not a real explosive.

“Email is not a common vehicle for communicating threats because it can typically be traced,” Sigrist said, but he added that with advances in technology, savvy computer users are able to send anonymous emails that can be hard to trace back to the sender.

The disruption caused by shutting down school for a threat is worse than a snow day, because of the fear, Sigrist said.

“All of the sudden kids are afraid to come to school because all these bomb hoaxes,” he said. “That’s an emotional toll.”