Your Questions Answered by a School Safety Expert 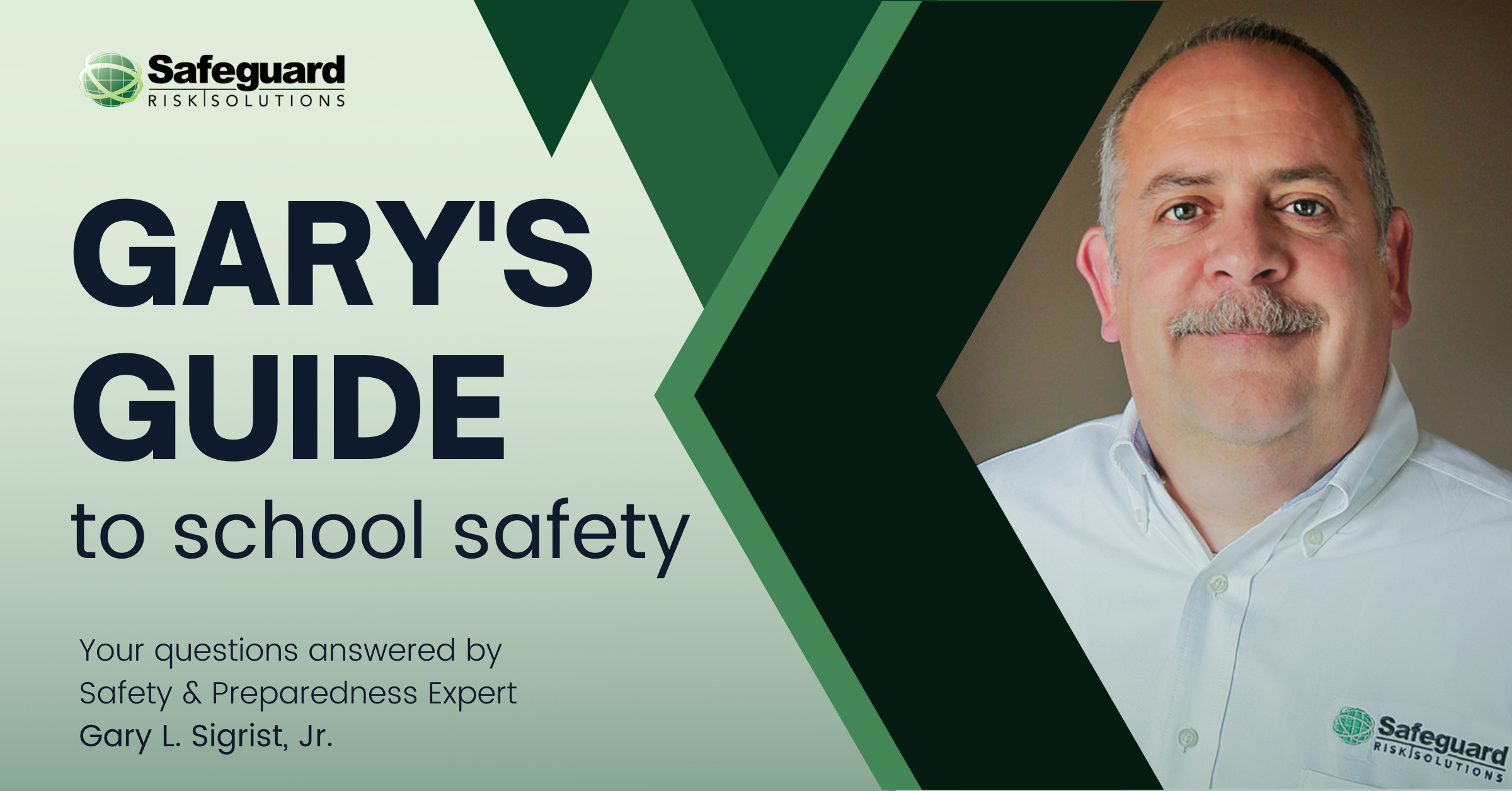 The following questions will be answered by Gary L. Sigrist, Jr., President and CEO of Safeguard Risk Solutions.  Gary is a nationally known speaker, consultant, author and expert on emergency preparedness.  His career spans more than 30 years as an educator, administrator and police officer.  Gary’s background in both education and law enforcement gives him a unique perspective on safety and preparedness, which he brings to his work with clients of Safeguard Risk Solutions.

You mentioned before that School Resource Officers (SRO) should not be involved in school rules and enforcement actions and being a part of a board.  How about being a part of a Safe Schools enforcement team role as a sit in?  Very similar to a Threat Assessment (TA) team.  Have you seen many boards like this outside of a TA team?  In Alameda it was called, ASSET (Alameda Safe Schools Enforcement Team), comprised of administration, Youth Services System, Inc. / Juvenile probation, SRO or Law Enforcement Officers (LEO) assigned to school, mental health.  This program included meetings with parents and the student involved.  But everyone had input, aimed closely at restorative action and not the “hammer.”

I think that every time Law Enforcement sits on a school committee working to create a safe working and learning environment it is one more opportunity to build relationships in your school.  You are correct this is remarkably like being on a Threat Assessment Team (TAT).  The purpose of TAT is not to punish a child but to determine what help the child needs to get them off a pathway to violence or a pathway to justification.  Alameda Safe Schools Enforcement Team (ASSET) seems to ahead of the curve by taking a multi-disciplinary approach to solving the problems in their schools.  I am a huge proponent of restorative justice programs.  From an SRO standpoint, using this approach allows students to see the SRO as a person to help them, not arrest them.

Wouldn’t you say that an established/best practice School Behavioral Threat Assessment Model/Process would help define behavior evaluation, action-mitigation, and follow-ups?  In Florida, almost all districts have SROs included on Threat Assessment Teams which are very valuable because we are often made aware of additional behaviors, charges and past history, and family concerns. Thoughts on having SROs in TATs?

SROs can be an important member of a TAT.  As stated, an SRO can add additional insight to see a better picture of the student.  I think I once heard, “In order to connect the dots you have to collect the dots.” TATs are not based on punishment or disciple but are designed to get children the help they need when in crisis.  I am always looking for silver linings.  After Parkland I saw a shift from security personnel and hardware to counselors and social services.  This is long overdue.

Do school administrators still need to participate in the “class” with their SROs?  If not, why did this part of the program cease to exist?

Unfortunately, when the grant funding went away, so did the requirement for the SRO and school administrator to attend the National Association of School Resource Officers (NASRO) annual conference.  We talked during the session about hitting a reset button.  I believe in our reset there should be mandatory training for school administrators with an SRO in their building.

The issue of enforcing school discipline rules is huge. It must be made clear to all in the school and LE agency that the SRO does NOT enforce school rules. Sometimes administrators ask officers to enforce school rules. This officer needs to have the maturity, training, backing of command and Memorandum of Understanding (MOU) policy to say, “enforcing school rules is not my role. That is the role of the school administrator.” This issue is sometimes a particular challenge for school district police officers, who are employees of the school district.  School administrators, both at the building and district level, fear public backlash and have now become hesitant to discipline students and to promote positive behaviors and culture.  This has led to leaning on SROs for discipline (school-to-prison pipeline) which is unfair to law enforcement.  Thoughts on this?

I cannot state enough times that it is not the role of the SRO to enforce school rules. This weakens the effectiveness of the SRO because they are now looked upon to use their legal authority to enforce a rule that may not be an offense if committed outside of the school.  I can see some challenges for the School Based Law Enforcement Officers (SBLEO), but this is where it takes the right person to be a SBLEO.  In taking an action because of a violation of a school rule, they need to react as if they are a teacher or any other school employee and not a LEO.

A well-written MOU and training for the SRO, school administration, and staff will help eliminate this problem.

I found I have some administrators who want to do their own investigations first before calling the SRO even though they know it is a crime that was broken.  I have talked myself blue trying to get them to stop that practice.  Do you have any other suggestions?

Are there trends for implementing School Police versus SRO? We are weighing on the differences.

After Parkland I was starting to see a trend of schools starting a SBLE program and more parents wanting SROs in their schools.  Now I am just seeing the call to remove all Law Enforcement from schools.  A few years ago, a district replaced their SROs with a private security firm.  They only had SROs in their high school and middle schools.  They were able to put an armed security guard (All were retired military/LEOs.) in every building with the cost savings. Because they were not Law Enforcement Officers, they have zero arrest powers.  They are basically a gun in the school in case the worst happens.

I agree with you about the body cams, but it is so expensive to blur out the faces of the other kids that are in the view of the camera that is not involved in the incident. How do you cut that cost down?

As we all learned in the academy, in the absence of law we follow department policy. If as an SRO you must wear and use your body cam then you will need to follow your policy.  In Ohio, we now have a law that covers SROs and LEOs responding to an incident at schools.

Some Peace Officers – including School Resource Officers (“SROs”) – wear body cameras, which occasionally capture images of children. The statute clarifies that images of children – and any information that could lead to identifying prominently featured children – do not have to be produced in response to a public records request. Under this law, even a parent’s consent does not authorize the release of these images in response to a public records request. Importantly, however, this statute does not affect school districts’ obligation to provide parents with educational records as required by the Family Educational Rights and Privacy Act (FERPA). If a parent requests educational records, which include body camera images of their own child, the district is likely obligated to provide access to said footage following FERPA requirements.  This, of course, assumes that the video has been shared with the district. If the video was not shared with the district by the SRO (or the police department), it is not “maintained” by the district and cannot be an educational record under FERPA.

A person seeking public records which include such student images may ask the Ohio Court of Claims to consider whether the public interest outweighs the child’s privacy. If the court finds that the public interest in the recordings substantially outweigh student privacy interests, it will order the records released.

The new law also exempts school districts’ infrastructure records from mandatory disclosure. Specifically, the configuration of critical systems – ventilation, water, security codes, electrical, mechanical, communication, computer, or the infrastructure or structural configuration of a building – do not have to be produced in response to a public records request.   However, simple floor plans depicting only the spatial relationship of components of the building may be disclosed. *

*Miriam Pearlmutter is an attorney at Walter | Haverfield.

My County was recently awarded a grant aimed towards increasing the security in our schools.  Do you have any recommendations for must-have equipment or supplies?

An added unseen layer of school security would be to make your School and/or District’s Emergency Plans available to all of your teachers, administration, and staff member by using the Mobile Emergency Response Plan, or MERP, mobile application.  The MERP is a school emergency management software that allows your Emergency Plans and Contact Information to be on the desktops and mobile devices of your staff, bus drivers, and even local first responders.  The MERP comes with safety plans pre-installed but allows Schools and Districts to put their own safety plans in the hands of those that need it, when they need it.  Knowing how quickly plans can change, I designed this specific school emergency management software to allow the School or District to customize and revise their plans at any time for free.  At a base cost of only $750 with an additional $1 per user, you can’t afford not to have the MERP.  Every teacher, support staff, janitor, bus driver, and principal will have access to your school’s emergency plans and will be able to appropriately respond to any situation – from a student’s nose bleed to an angry parent in the school building to interacting with a student with COVID-19.

Submit Your Question to Gary Now

Submit your question about safety or emergency preparedness to Gary

Looking for answers to your school safety-related questions?  One week after being hired as a K12 safety director, I discovered I had more questions than answers.  Fortunately, I was able to develop a network of people I could call or email for suggestions, advice, or...

END_OF_DOCUMENT_TOKEN_TO_BE_REPLACED

Below are the remaining questions I received during the August 18 webinar, Using Drills and Exercises to Test Your School's Emergency Operations Plan, hosted by the Campus Safety Webcast Series.  The replay of the webinar can be found HERE by logging into your...

END_OF_DOCUMENT_TOKEN_TO_BE_REPLACED

Below are some of the questions I received during the August 18 webinar, Using Drills and Exercises to Test Your School's Emergency Operations Plan, hosted by the Campus Safety Webcast Series.  The replay of the webinar can be found HERE by logging into your existing...